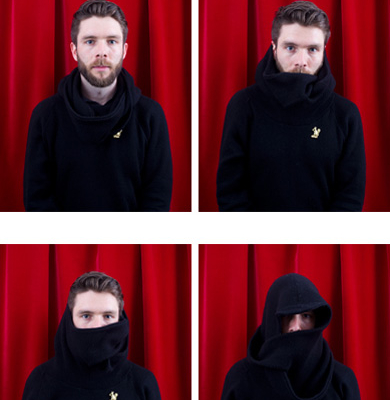 Julian Hetzel (1981,DE) studied at Bauhaus University Weimar(Diploma thesis in 2008). He is active member of the Leipzig based electro pop band Pentatones. In 2005 he co-founded a Weimar based studio- and workshop-project in collaboration with the media-artists "YouAreWatchingUs", working on audio-visual performances. At DasArts, Julian developed work that has a political dimension and a documentary approach. His award winning lecture performance “The Benefactor”, a performance about gifts, investments, parasitism and the state of the arts, was presented internationally.

In 2006 they cerated the transdisciplinary media-art-project "preENTER", which has been displayed at ARS Electronica festival '08 in Linz, Austria. Since then he worked on the interconnection between different medias, formats and artistic languages. In 2008 he implemented the transdisciplinary Project “Monokultur”, which he presented at Deutsches National Theater Weimar. He worked as freelancer for several Theaters as Visual Artist and Conceptual Designer.
In 2009 he founded "Le Schnigg", office for audiovisual strategies and solutions, in Leipzig. Meanwhile he has a lectureship at the art & design department at Bauhaus University Weimar. In 2012, Julian won a competition of Huis & Festival aan de Werf (Utrecht), which gave him the opportunity to develop and present his project “The State of the State”. Julian participated in the European network “Global City, Local City”, an artistic research program on social, ecological, and political realities connected to different urban phenomena. His graduation piece “I’m not here says the void” has been produced by Frascati and has since been presented internationally.
In 2013 he co-curated a Symposium about “The Right To Mask” for the Quadrienale Prague. In 2014 the Nieuwe-Makers-subsidie (a grant for young makers) was assigned to Julian and SPRING Festival (the merge of Festival a/d Werf and SpringDance) by Fonds Podium Kunsten. Julian is thereby artist in residence at SPRING Performing Arts Festival Utrecht. In the past year he was invited to present work at Spielart Festival (Munich), “Espacios Revelados Festival” (Buenos Aires), Theater der Welt (Mannheim)… He recently developed a commissioned performance for the National Theatre Riga (within the Framework of the European cultural capital).
In 2015 he will present his performative installation “STILL - The Economy of Waiting” at Theaterformen Festival Hannover. In May 2015 he will premiere his upcoming creation “Sculpting Fear”. www.julian-hetzel.de