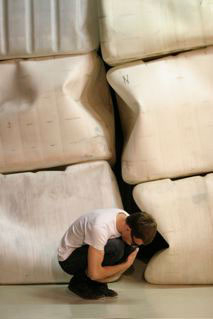 Ame Henderson lives and works in Toronto, Canada where Public Recordings supports and promotes her collaborative projects.  The works ‘Blue**Disco’ (2002), ‘memories and statements’ (2004), ‘Manual for Incidence’ (2005), ‘/Dance/Songs/’ (2006), ‘Open Field Study (all together now)’ (Nuit Blanche, 2007) and ‘it was a nice party’ (Dancemakers, 2008) have been presented in The Netherlands, Italy, Croatia and across Canada. ‘The Most Together We’ve Ever Been’, a duet she made with Matija Ferlin, premiered in 2009 at INK (Pula, Croatia) and was also presented at Tangente (Montreal) in the same year and at Dancemakers’ TWOBYTHREE - a festival of duets in 2010.  Her upcoming project, ‘relay’, brings together a diverse group of artists to make a performance that asks questions about the politics and possibility of being together. ‘relay’ investigates modes of togetherness through the examination and rethinking of the unison gesture, asking if it is both possible and compelling to move together without abandoning individuality. At the same time, this work gently unearths the dancers’ past performance memories to both investigate the role of the dancer in the emerging dance archive and to propose questions about community, authorship and legacy.