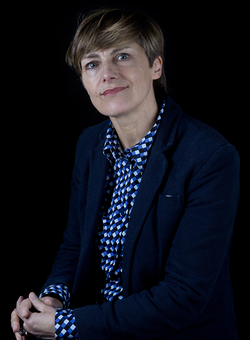 Born and bred in Aotearoa/New Zealand Alison Isadora is a performing composer (or composing performer) and educator practising in the Netherlands since 1986. She studied political philosophy and music at the Victoria University of Wellington (NZ), violin (Vera Beths), and composition (Gilius van Bergeijk and Theo Loevendie) at the Hague Conservatorium and post-graduate performance theatre at DasArts in Amsterdam. She is currently a research fellow at DAS THIRD and embarking on a practice-based Doctorate focussing on co-creation within the composer/performer paradigm in Wellington.
Isadora has been a performing composer within numerous Dutch groups including Hex, Gending, Nieuw Ensemble, the Maarten Altena Ensemble and the multi-medi duo SYNC. Her works are presented by diverse ensembles in the Pacific, Europe and North America including Ensemble Klang, David Kweksilber Big Band, Matangi Strijkkwartet, Nederlands Blazers Ensemble, Array Ensemble (Canada) and STROMA Ensemble (NZ). As well as composing for music ensembles, Isadora also creates music-theatre performances, audio walks and installations.
In the last years she has become increasingly interested in the possibilities of connecting music to other disciplines. Her works often incorporate elements of story-telling and participation while addressing social issues. As music educator, Isadora has explored elements of sound and composition with dance, choreography and theatre students at ArtEZ Institute of the Arts in Arnhem (NL) and post-graduate Arts Students at the Victoria University of Wellington (NZ).

Towards an ecology of new music

Classical music has a long tradition of separating the function between the maker (composer), the reproducer (performer) and the receiver (audience). Contemporary western art music has most often adopted these relationships without questioning their appropriateness. My research is focused, within the confines of the new music paradigm, on considering what an ecology of practice (Stengers) for new-music, might look like. What impact might this have on the role of the composer, performer and audience and also on the relationships between these three agents and what obligations exist between composers, performers and audiences towards their 'dialogical others'? (Benson).

I am proposing that the ephemerality and largely non-reproductive experience of new-music performances creates a natural alignment with theatre and dance practices and that therefore performance theory can be usefully applied to the new-music situation. This suggests furthermore, a reconsideration of the dominant art music practice of reification of the score. What kind of practice might one create if the score is no longer a fixed object but rather an invitation to act?

Strategies from experimental music and performance practices will be examined for their efficacy in encouraging imaginary role repositioning for the composer, the performer and audience member.