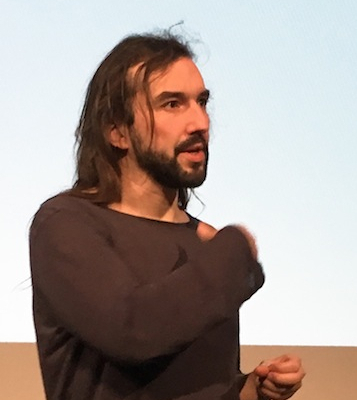 Julien Bruneau is a dancer, choreographer and visual artist based in Brussels. At the intersection of movement, drawing and language, his work investigates the dynamic interplay between interiority and collectivity. He creates performances and dance pieces, but also drawings, in-situ installations, on-line publications and discursive events. Since 2010, he develops his projects with artists and dancers M.Dalinsky, A. Llaurens, L.Myers and S. Si Ahmed. As a whole, his work addresses the interactions between the many layers of our being into the world. More importantly, it aims at invoking the ungraspable flow that animates these layers and percolates through them.

He graduated from La Cambre (Brussels, 2002) and completed a master in choreography at the Theaterschool (Amsterdam Master of Choreography, 2014). A member of Sarma since 2014, he works on the technical and artistic follow-up of the on-line publications on Oral Site. He also joined the editorial board of Revue COI (TJP Strasbourg) in 2017 and is part of Third (3rd cycle research group, DAS Graduate School.)