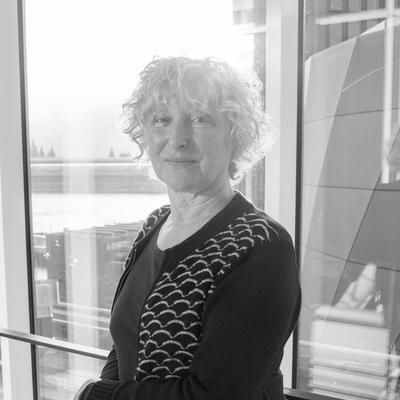 Gwenoële Trapman (Amsterdam, 1960) is artistic director of the master 'DAS Creative Producing - Entrepreneurship in the Arts' of the Academy for Theatre and Dance (ATD) at the Amsterdam School of the Arts. She is also doing PhD research on entrepreneurship in the arts at the School of Business and Economics of the VU University Amsterdam. Since 2011, for the ATD, she has researched various forms of cultural entrepreneurship in Europe and the US, including the organisation of various symposiums on this topic. The DAS Creative Producing master's degree is the result of this research. From 2001 to 2018, she was Associate Professor and Artistic Director of the Production and Stage Management programme at the ATD. From 2004-2014 she studied Law and Constitutional and Administrative Law at the UVA; in her master's thesis she examined the legal assessment of the criterion of 'cultural entrepreneurship' in subsidy procedures. She previously worked as an independent producer of various theatre and musical theatre productions, was managing director of the Grachtenfestival and worked as head of production at the Holland Festival and Theatergroep Hollandia.