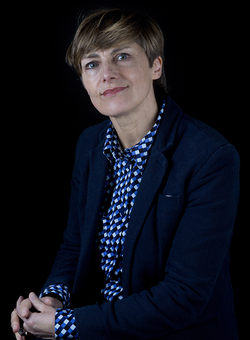 Born and bred in Aotearoa/New Zealand Alison Isadora is a performing composer (or composing performer) and educator practising in the Netherlands since 1986. She studied political philosophy and music at the Victoria University of Wellington (NZ), violin (Vera Beths), and composition (Gilius van Bergeijk and Theo Loevendie) at the Hague Conservatorium and post-graduate performance theatre at DasArts in Amsterdam. She is currently a research fellow at DAS THIRD and embarking on a practice-based Doctorate focussing on co-creation within the composer/performer paradigm in Wellington.
Isadora has been a performing composer within numerous Dutch groups including Hex, Gending, Nieuw Ensemble, the Maarten Altena Ensemble and the multi-medi duo SYNC. Her works are presented by diverse ensembles in the Pacific, Europe and North America including Ensemble Klang, David Kweksilber Big Band, Matangi Strijkkwartet, Nederlands Blazers Ensemble, Array Ensemble (Canada) and STROMA Ensemble (NZ). As well as composing for music ensembles, Isadora also creates music-theatre performances, audio walks and installations.
In the last years she has become increasingly interested in the possibilities of connecting music to other disciplines. Her works often incorporate elements of story-telling and participation while addressing social issues. As music educator, Isadora has explored elements of sound and composition with dance, choreography and theatre students at ArtEZ Institute of the Arts in Arnhem (NL) and post-graduate Arts Students at the Victoria University of Wellington (NZ).