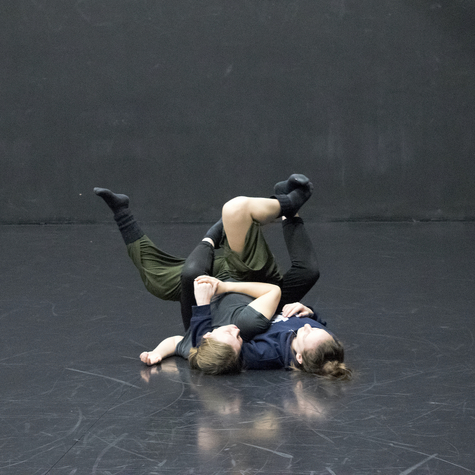 On 1 December Carolien Hermans succesfully defended her dissertation in the Academy Building of Leiden University.

The starting point of Hermans' research is how both children's physical play and dance improvisation by professionals can be considered somatic practices where sense-making manifests itself in and between bodies, and through movement. Hermans makes use of the concept of participatory sense-making (De Jaegher & Di Paolo, 2007) to understand the role of movement, and lived experience, in the way we make sense of self, others and world. This philosophical-scientific premise is closely aligned with enactivism, an approach in cognitive science that claims that cognition is not so much an internal, mental phenomenon as it is the result of the dynamic relationship between an organism and its environment. Enactivism offers an alternative to traditional models that conceive of cognition as an internal information-processing process in which perception and action serve primarily as inputs and outputs. Body, context, and (the lived) experience thus play a crucial role in the sense-making process.

Hermans arrives at six shared characteristics of participating sense-making in children’s physical play and dance improvisation. This involves: 1) a real-time process in which embodied decisions are made in the moment, 2) kinaesthetic pleasure and the bodily delight of moving, 3) rhythmic coordination of movements and actions, 4) creative movement exploration based on existing and emerging constraints, 5) ambiguity and indeterminacy, and 6) qualitative dynamics that contribute to the expressiveness of a movement. These six characteristics have been explored in three phases of her artistic work: living archive of children’s play events, re-enactment through dance improvisational practice, and a creative toolkit for children between 4-10 years.

Carolien Hermans concludes that both physical play and dance improvisation offer powerful tools to explore in-depth the concept of participatory sense-making. In both activities, embodied meanings come about through the intimate entanglement between movement and affect. Creative movement exploration can thus help the participants to break the daily movement routine and pay attention to the kinetic/kinaesthetic and tactile dimensions of movement. It offers a powerful opportunity to engage with the body in a creative way and to experience how movement itself is at the heart of all sense-making processes.