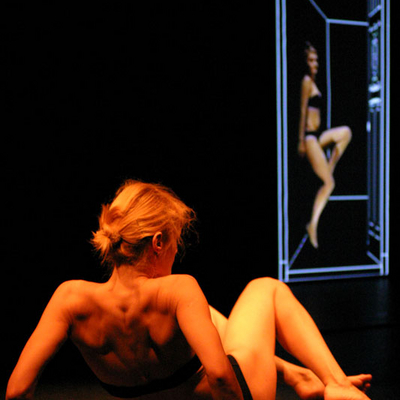 Before coming to Amsterdam, Andrea Bozic studied modern dance in Croatia, and earned a degree in the English Language and Literature and Comparative Literature from the University of Zagreb. In Amsterdam, she graduated from the School for New Dance Development (1999). She makes installation and interdisciplinary performance work, as well as short dance film and short interventions and most of it exists as a patchwork of disciplines.

Andrea works at the Gasthuis Theatre/Frascati in Amsterdam in collaboration with other co-producers and presents her performance work in Holland and internationally.

“And for everything which is visible, there is a copy of that which is hidden” - Gary Hill
In ‘He Thought He Saw An Elephant’ people and moments exist in-between spaces. They emerge on stage from behind the black curtains only to disappear once again. A performance inhabited by real and imaginary people moving through a landscape of constantly shifting atmospheres, like scrambled pieces of a puzzle. The centre is everywhere and the focus constantly shifts.

'It’s Me But I’m No Longer There' (2004)
A performance with an absent performer for two active audience members.

Hi,
Please come inside… this is my room. Feel free to have a good look and play around. Feel free to make a lot of mess. Feel free to destroy things.
Just bear in mind: someone is watching what you are filming. Someone can hear how you are moving.

What happens to theatre when there are no performers left? When the audience alone has to make theatre alive? ’It’s Me But I’m No Longer There’ inverts the relationship between distance and intimacy, presence and memory, voyeurism and privacy, documentary and invented, counting on the play instinct:

It is an open door to my room that I left just recently. Does it still say something about me, even if I am no longer there? Am I still in my hair after it is cut, am I in the books I have read, in the photos of me, in the smell I left in the clothes, in a secret letter I hid, in the particular setup of the room? The audience is invited to enter my room and play.


‘Ways To Multiply Yourself’
A performance for a body viewed by two cameras and split into several audio and video projection surfaces. The piece demonstrates how to multiply yourself, how to be at two places at the same time and how to be more than one person at the same time. It gives an answer to the question: am I imagining myself? The answer is: yes.