'TALK / SNDO 1982-2006 online' is a series of online publications related to the School for New Dance Development, published as an extension of the book under the same name, printed in 2009.

The idea is to continue TALK online. Students, teachers or guest teachers from SNDO writing about dance development, can contact Esther Arribas to have their work published online: esther.arribas@ahk.nl.

Flying Low is like flying close to the ground, taking your centre flying to the ground. I had to figure out how to go up and down, without crawling on my knees.

David Zambrano / talking to students of the SNDO
David Zambrano presented a lecture to students at the SNDO in 1991 about the Flying Low dance technique and his approach to improvisation in dance. The lecture describes Zambano’s background, the transition from studying computer science to dance and explains the role of improvisation and games in the making of his work. He talks about putting theory into practice and compares social dancing to dance composition.
Download Flying Low (PDF)

What I would dance with is a sort of witness. There is a conscious mind involved, but it's not doing active duty.

Steve Paxton / interviewed by Robert Steijn
Robert Steijn interviews Steve Paxton at the School for Dance Development in 1999. Paxton took part in the improvisation event organized by Magpie and Katie Duck at the Frascati Theatre where Steijn was the producer. In the interview Steijn explores the boundaries of what improvisation means to Paxton. They discuss questions around perception of the moving body, by the dancer and by the audience.
Download Training Perception (PDF)

I have no idea, but I think all my favourite people have been skipped over by dance historians.

Jaap Flier and Remy Charlip / interviewed by Sally Summers and Lisa Kraus
In a discussion panel at the SNDO in 1989, Sally Summers and Lisa Kraus ask questions to Jaap Flier, former soloist and artistic director of the Nederlands Danstheater, and Remy Charlip, choreographer and former dancer with Merce Cunningham. They discuss their first collaboration together in Australia, when Charlip made the airmail dance, developments in New York at the end of the 1950s, prior to the Judson period and how they were linked to the Dutch dance scene, through the work of James Waring, Glen Tetly for the Nederlands Danstheater. About the excitement of doing wild, crazy and wonderful things, you never know what was going to happen.
Download Just before Judson (PDF)

4. Reflexivity in the context of choreographic practice

I understand that there is an unconscious, or not conscious, drive. But your body is performed. There is a format - you are the format.

MP 3/ three choreographers, a dramaturge and a philosopher in discussion
The MP3 mini-conference was organized on 5 April 2003 at the Theaterschool by Dance Unlimited Amsterdam. It took place in the context of the theory curriculum for which a key line of enquiry was what might constitute practice-based research.
For the mini-conference this enquiry was formulated as 'what is reflexivity in the context of choreographic practice?'
Three choreographers, Thomas Lehmen, Raimund Hoghe and Vincent Dunoyer, a dramaturge/ writer, Marianne van Kerkhoven, and a philosopher, Henk Oosterling, were invited to come to Amsterdam to take part in a daylong discussion related to this theme.
Download Reflexivity in the context of choreographic practice (PDF) 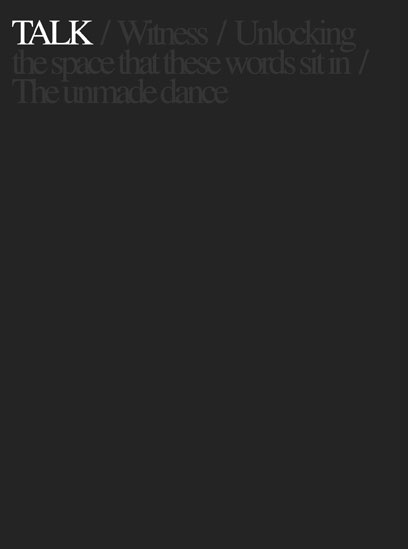