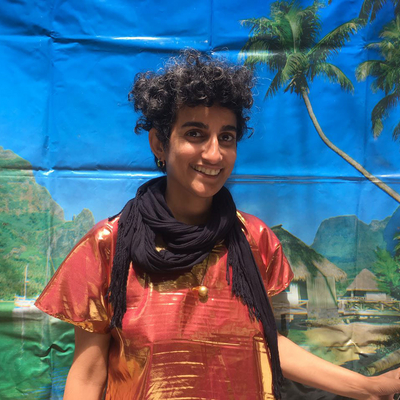 I use the term ‘bodilessness’ to address a historical ambiguity. It comes from ‘bodiless head’, a phrase that refers to the body of a lover in Persian narrative literature. Persian classic literature is full of examples in which the body is described in multi-layered, evasive or courteous metaphorical language. The body might be considered holy and transcendent, or in contrast, abject and stigmatized, but either way, it is untouchable. Bodilessness signifies the undefined, undelineated presence of the body, the perhaps deliberate absence of physicality, which may leave it open to interpretation.
Can relate to the fact that Persian is a non-gendered language, to a non-normative, undefined image that can include all genders, shapes and races? Can it be an alternative to the mechanistically generated profile picture (Instagram, Facebook and so on) for the representation of the self? Or can it be an introduction to a different sensibility that can help me understand contemporary issues like the veiling of the body, asceticism, martyrdom, and cosmetic surgeries?veiling of the body, asceticism, martyrdom, and cosmetic surgeries?
Traces What are the traces of bodilessness in my literary and visual heritage (including poems, stories, photos, movies, sculptures, family photos and videos), also in the practices that I have been exposed to (personally and historically), such as  treatments for illness, social norms and limitations, sexual experiences, and so on?
More traces How does bodilessness relate to designators such as the absent body, the missing body, the body without organs, the abject body, the queer body, the Anthropocene/post-human body in Western body-based thinking?
In-between traces How can I (re)introduce this quality through my dance, making dreams in between different contexts, social norms and sensitivities?
Setareh Fatehi is a freelance artist/choreographer, teacher, performer and the co-director of Stichting TUSSEN ruimte/پادرهوا for artistic exchange between Iran and the Netherlands. She completed a BSc in Polymer Engineering at the University of Science and Technology (AUT) in Tehran (2008) while also taking private courses in folk dance, mime, classical ballet, synchronized swimming and contemporary dance in Iran. She received her second BA in Choreography from the School for New Dance Development in Amsterdam. Her fascination lies in the history of all the bodies that have affected her contemporary body. Setareh Fatehi has worked with artists like Deborah Hey, Katerina Bakatsaki, Aernout Mik, Andre Lepecki, Jennifer Lacy, Ivana Muller, Dries Verhoeven and Noha Ramadan; has collaborated/ is collaborating with Shahrzad Irannejad, Frederick Rodrigues, Olivia Reschofsky, Tara Fatehi Irani, Pouya Ehsaei, Yalda Pakzad, Nadia Bekker, Parnian Fatehi, Madarjoon (her grandmother), Maria Mavridou, Paula Chavez, Roham Amiri, Afshin Chizari, Eva Sussova, Yurie Umamoto, Astarti Athanasiadou, Jessica, Nicolas Roses, Karin Verbruggen, Mani Monadizadeh, Karin Frankel and Arash Garousi; and grew up next to/ inside of Sonia Mahmoudi(mother, 1984-...), Mani Fatehi Irani (father, 1984-...) , Baba Hossein (grandfather, 1984-2001), Shokouh Mirfattah (aunt, 1984-2010, cofounder of Iranian Spinal Cord Injury Association), Seyyed Mohammad Khatami (Iran’s president from 1997 to 2005), Fourough Farrokhzad (poet, 1994-1967), Homa Asempour (former professor at the AUT, 2002-2007), Vahid Rouhnia (music teacher, 1996-2000), Roxana Sepehr (language teacher/friend, 1997-...), Rashin Fatemi (best friend, 2005-...), Negin Saed (cousin, 1984-...) and many, many others.