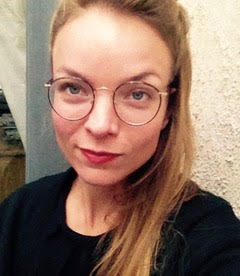 Since her graduation from the MA Theatre Studies at the University of Utrecht in 2009, Nienke is developing a dramaturgical practice through which she works and thinks in relation to other realms than performance alone. As a dramaturge she got particularly involved in co-developing methods and practices invoked by new forms of (performance) art - with Dries Verhoeven, Emke Idema, Anne Breure, MOHA, Genevieve Murphy i.e. Since 2014 she works at Veem House for Performance as house-dramaturge, creating discursive programs. Currently she finalises her own publication series Words for the Future, a search for a language that might help to open up imaginations on the future. She lectures at the MA Scenography in Utrecht, and is a co-founder and member of Platform-Scenography. Since 2016 Nienke is researcher at DAS Research, first within the Local School and now as fellow of the second cohort of THIRD.
Recent publications include: Dramaturges that Do Not Work for a Work in ‘Dramaturgy at Work’ (by K. Georgelou et all, 2017); and Current Movements, Future Landscapes (co-edited with P-S/Research Centre Performative Processes, 2016). Nienke (1984) lives in Utrecht.