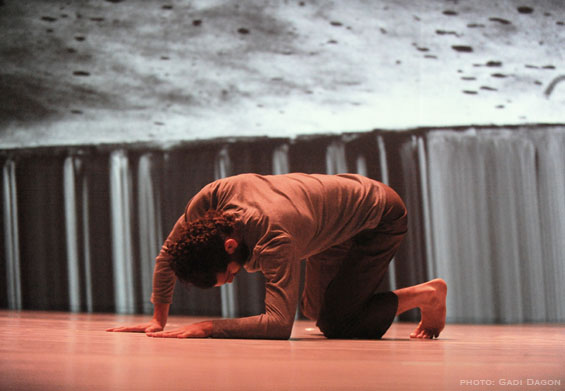 Christina Ciupke en Arkadi Zaides, students at the Amsterdam Master of Choreography, will present their work at the Festival for Contemporary Dance in the Deutsches National Theater in Weimar.

Christina Ciupke en Arkadi Zaides, students at the  Amsterdam Master of Choreography, will present their work at  the Festival for contemporary dance in the Deutsches National Theater in Weimar.

The aim of the festival is to discover new work and aesthetics in dance, choreography and performance, and to be part of the artistic debate. The focus lies this year on four relatively young european Master courses as laboratories, in which the propositions for the art of tomorrow are investigated. Participating will be the MA Choreographie und Performance (CuP), organised by the Justus-Liebig-Universität Gießen and the Hochschule für Musik und Darstellende Kunst in Frankfurt/Main, the Amsterdam Master of Choreography of de Theaterschool at the Amsterdam School of the Arts, the MA Essais at the Centre National de Danse Contemporaine (CNDC) Angers and the MA Solo/Dance/Authorship (SODA) at the Hochschulübergreifenden Zentrum Tanz Berlin.

Rather than a complete panorama of the study programmes, what will be shared is the pluriformity, creativity and heterogeneity of the dance makers. The study programmes are all internationally oriented and the artist of the festival have distinct cultural backgrounds, that influence their artistic work and transforms their work. Students of the master programmess have already experience as artists; they use their studies to reflect on their artistic practice in critical manner, develop it so as to develop themselves in the increasingly interdisciplinary contemporary art. They formulate artistic research plans and investigate new ways of producing. Dance does not limit itself anymore tot he creation of virtuous movements of the body, but reflects bodies and movement in their various social, cultural and political contexts.

Presented will be works from current students as well as graduates and teachers. In the programme there will be artist talks as well as workshop formats, that are part of the various programmes. This will allow the possibility to get to know the various modes of working and experience what burning questions are moving a new generation of choreographers.

The specter of themes in the festival reaches from the questioning of personal memory, identity and ambivalence, to the mise en scene of affects and subtle communication to the search for traces, that the conflict in the Middle East leaves on individual bodies.

The festival will open on May 7 with 'A vida enorme', a piece about the poetry of light, speech and encounter between two people by the internationally acclaimed choreographer Emmanuelle Huynh, head of the master programme in Angers (F). Also two solo works will be shown by  Katerina Andreou and Volmir Cordeiro, both studying at the MA Essais.