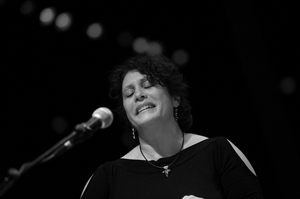 Jodi is a native Californian based in Amsterdam.
She holds a degree in Renaissance Theater from UC Berkeley. She has worked in the fields of music, dance, and theater throughout USA, Europe and Asia.  She has performed in festivals, clubs, theaters with Meredith Monk, Elizabeth Swados, Roscoe Mitchell, reed player Michael Moore, cellist Fred Lonberg Holm, Available Jelly, Misha Mengelberg’s ICP Orchestra, Paul Termos 10-tet, and with Han Buhrs and the Schismatics.

She has performed and released CDs with her own groups: The Voice is the Matter, Rasp/Hasp, and Spoon 3, and Rara Avis. She currently also sings with the ALL ELLINGTON big band, and August 38, improvising choir.

She has received several grants to study theatrical forms and music in Bali and was sent to Mongolia by the Dutch government to work and perform with Mongolian musicians and singers.

Since 1990, she has taught at the Theaterschool in Amsterdam, now ATD, where she teaches voice, physical theater, and improvisation for the Modern Theater Dance (MTD), and the newly- formed Expanded Contemporary Dance (ECD).

She has an ongoing voice practice in Amsterdam.